The Los Angeles Times news “executives” are in troubled waters. They believe they run the newspaper and Web site. A recent example — the publisher made plans to update its monthly magazine  — replacing the magazine’s deteriorating editorial staff with a new crew of pros experienced in real-world magazine publishing, fashion, creative and communications according to two executives at the newspaper.

The liberal editors fawning for Obama will not publish this candid AP photo of Obama and friends. Why not? Do you have to ask? 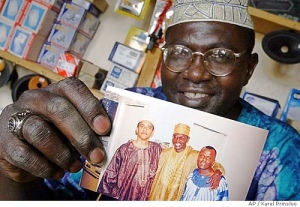 Back to the insider info. The new plan for the magazine goes well beyond the stale tradition of monopoly newspapers, which keep business operations, public relations, marketing and advertising, separate from the editorial department. An archaic system that has no other peers in the real world, except for organized religion. The Vatican comes to mind.

A casual reader of magazines such as Cosmopolitan, People, Vogue and Maxum can see that they are much more hip and marketing driven (not to mention, profitable) than big city newspapers’ thin, wordy, dull, 24-page poop wrappers. Look at the national newspaper magazines,  they too are marketing  driven. Do you ever read  Parade and USA Weekend.? They sell stuff.

A new magazine editor and staff have already been picked by Zell’s lieutenants without consulting the “editoriali.” Future issues have been planned, and mock-up covers were made — all without the knowledge of anyone in the newsroom.

How dare they not involve the editorial suite of cheap suits!

Why should the editors be in on enterprise/marketing decisions? Answer: because they always have been calling the shots at the LA Times, Chicago Tribune and SF Chronicle. They are all losing millions of dollars.

The LA Times top editor, Russ Stanton, especially had his tighty whities in a bunch.

They said that Mr. Stanton, after hearing about the move, asked the publisher of The Times, David D. Hiller, and the president of the newspaper, Jack D. Klunder, to change the name of the publication, which is now called Los Angeles Times Magazine. He argued that to keep the name would lend the newsroom’s credibility. It has not been blessed with the holy water from the high priests.

The Los Angeles Times is one of the large metropolitan dailies owned by the Tribune Company, which was bought a year ago or so by the real estate developer Samuel Zell. He has articulated an aggressive view of the newspaper business and its future, and recently announced plans to cut back news pages of AP stories and save the carbon footprint.

Both before and after Mr. Zell took control, there has been an unusual amount of turnover at the helm of The Times. Before Mr. Stanton took the top editorial job in February, his three predecessors had left in a semi-annual succession after refusing to make staff and budget cuts to stop the million dollars a week in losses at The Times.

It looks as if Mr. Stanton will be making a career move soon. Maybe the Santa Barbara News-Press will have a spot for him? Maybe he will go back home to the San Bernadino Sun?

The fate of The Times’s regular Sunday magazine has been grim for years when left to the editors to run it as they saw fit. Profit? Editors are not concerned with lowly issues like that. Cater to advertisers? No!

(The editors seem to be the only people in all of SoCal who don’t realize that retail, glitz and promotion are king in LaLa Land. The editors wanted to write hard-core stories, not glamour pieces with photo-shoots of skinny runway models.

The arrogant news staff asked publisher of The Times, David D. Hiller, and the president of the newspaper, Jack D. Klunder, to change the name of the magazine, which is now called Los Angeles Times Magazine. They argued that to keep the name would be a smear on the “good name” of the editorial department. Talk about the tale wagging the dog. Did they have an alternative name, like “adverising crap?” That’s what they think of the businesses that pay for their Men’s Warehouse suits.

Earlier this year, when it became public that Mr. Hiller was considering giving control of the magazine to the paper’s marketing and advertising managers, editors and reporters voiced fears that it would become less a work of journalism than a lightweight vehicle for currying favor with advertisers. Like Vanity Fair, Car and Driver, Cosmo,  GQ and Architectural Digest?

The issue is an especially sensitive one at The Los Angeles Times. In 1999, the paper published a special magazine section about a new sports arena, the Staples Center. Editors and reporters rebelled after learning that the paper shared the section’s profits with the arena and executives apologized for the arrangement. Soon after the “rebellion” the Times-Mirror family sold the troubled company to the Tribune Corp. The Chandler family didn’t like the slow motion, editor-centric management and soon after, forced the sale of the Tribune Co. They wanted their money. Mr. Zell bought it and took command of the empire in rot.

Now he is being fought tooth and nail by the stuffy “executive editors” of the old Times-Mirror empire.

The new editor, it is said, is Annie Gilbar is a former editor of InStylemagazine and has written or co-written a number of advice books, like “Wedding Sanity Savers.” Calls to Ms. Gilbar were not returned.

Nine magazine employees will have to find editorial work somewhere else in the building. Obits seem to be a good fit.